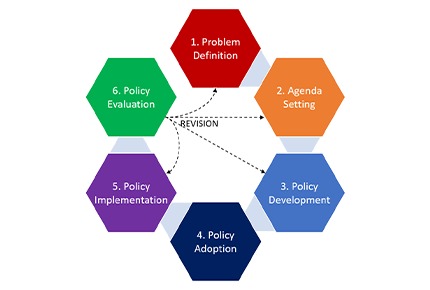 Role of Information Technology in Public Policy Formulation and Implementation

Role of Information Technology in Public Policy Formulation and Implementation

The phrase ‘public policy’ is used in everyday parlance during the discussions in public domain with respect to the policies such as agriculture policy, health policy, foreign investment policy, economic policy, labour policy, education policy and so on. A policy is defined as a course of action and policy framed by the government and impacting the people, at large, is called a public policy. It comprises a set of intentions or purpose, a description of the direction in which the government intends to move or introduce reforms, the actors involved and the measures to be taken. Public policy plays one of the most crucial role in governance and drives the social and economic development. Public policymaking can be described as a dynamic, intricate, and interactive system in which public problems are discovered and solved by developing new policies or reforming the older ones. There are various models of Public Policy formulations and Implementation(PPFI) and also various methodologies/stages to facilitate adaption of those models. This article attempts to explore the role of IT in some of the popular models in depth.

Policy making is an arduous activity and several models or theories can be referred to in policy formulation. Some important models are discussed as follows:

(i) Rational Model – The rationality principle underlines that policy formulation is a logical decision and the objective is to choose the best from the many options available.
(ii) Incremental Model – It states that policies are gradually scaled up when the viability and workability of the policy has been determined.
(iii) System Model – The process of making a policy is referred to as a “black box,” which transforms societal demands into policies. The inputs are processed and transformed into policies through the black box.
(iv) Group Model – It postulates that there are various pressure groups opposing each other in order to influence public policy in their respective direction.
(v) Elite Model -It is based on the idea that power is concentrated in a small group of people and benefits the elites. It assumes that in the real world, there are a few powerful people at the top and a mass of powerless people at the bottom.

1. Problem Definition – Identification of problem or issue that is called to the attention of the policy makers.
2. Agenda Setting – Prioritization and formalization of issues the policy-makers have decided to address.
3. Policy Development – Examination and shaping of solutions to issues; considerations given to alternatives.
4. Policy Adoption – Formal adoption / legitimization of a policy solution, usually in the form of executive orders, laws, rules & court decisions
5. Policy Implementation – Formation of policy’s implementation parameters, human and financial resources, administrative structures etc.
6. Policy Evaluation – Evaluation to verify whether policy’s implementation and effects are aligned with the objectives

For example, let us assess the applicability of the “Agenda Setting” stage in the “Rational” model. The applicability is perceived to be “High” because policy agenda is selected / prioritised based on rationality i.e. the urgency or need of a proposed policy which seems obvious to the policymakers and therefore this stage is highly applicable.

Technology has been playing a prominent role in the evolution of human society. Our world is fundamentally changing as a result of the technological innovations and the government functions including policy formulation and public service delivery has tried to keep pace with it. Governments have a rich history of leveraging Information Technology (IT) as an administrative tool, whether it is to automate top-down regulations or to convert paper forms to digital platforms. Many of them have seized the chance to use technology as a primary policy lever — a means of gathering data, exploring and modelling various policy options, and continuously monitoring and improving outcomes. Rather than staying a downstream tool of policy automation, IT has become a fundamental element of the policy making process. IT provides comprehensive databases that aids policymakers in the design, formulation, and evaluation of policies. It aids the government’s strategic planning process by allowing them to precisely define their objectives, aims, programmes, and projects. Governments have yearned to make better use of IT for evidence based policy making. This would help to facilitate improved planning, budgeting and overall decision-making & management by increasing access to relevant data at all levels of implementation.

An attempt has been made to theoretically evaluate the models and stages through five (5) dimensions as follows (the last four are considered IT dimensions):

The role of these five dimensions is being elaborated by using a 5x5x6 matrix in Table 2. The first dimension – “Applicability of that stage in the model” has been replicated as is from Table 1. The significance of the other four dimensions from (ii) to (v) explained above has been reflected for each model and each stage. If the significance is perceived to be large then it is denoted as ‘High’ and an equivalent quantitative rating of 3 is given. If the applicability of that stage against the model is perceived to be moderate then it is denoted as ‘Medium’ and quantitative rating of 2 is given else it is treated ‘low’ and given equivalent quantitative rating of 1. The significance and rating as stated in Table 2 are based on the Author’s considerable experience due to participation during public policymaking, understanding of the role of Information Technology, various studies of the reference models and stages of public policy formulation and consultation with peers. 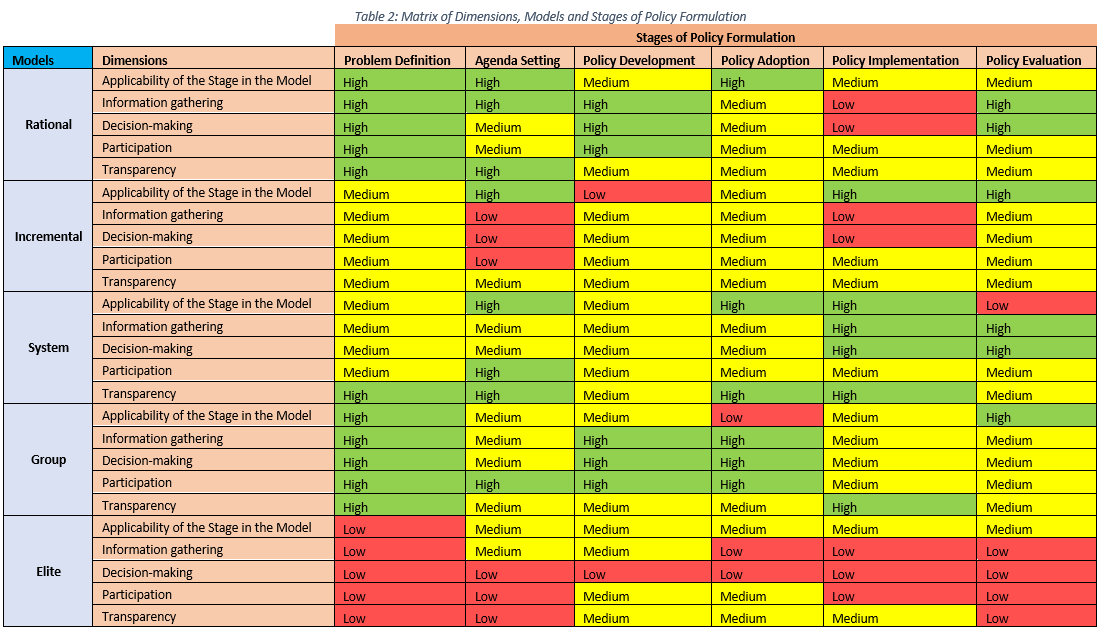 For better clarity and understanding of the above dimensions in the context of the models and stages of policy formulation, let us consider an example of “Agenda Setting” stage under the Rational Model. 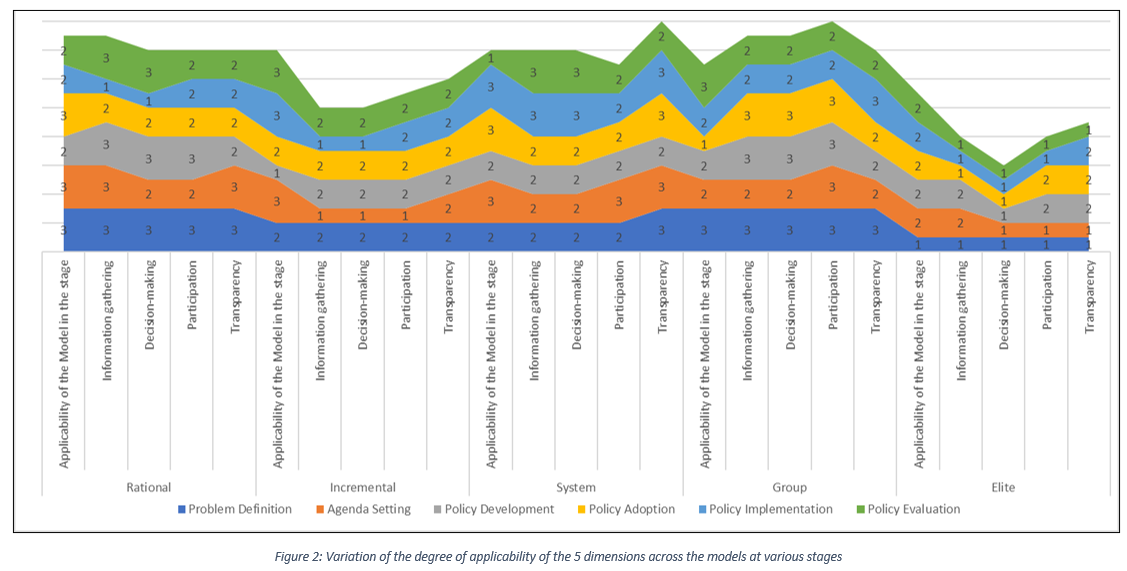 The graph in Figure 2 reflects the five dimensions (with their values from 1 to 3, 1 – Low, 2 – Medium and 3 – High) in the six (6) stages of policy formulation (represented by different colours) and the emphasis of these dimensions across the five (5) selected models of policy formulation. The purpose of article is focussed on possible degree of utilisation of IT in different model only during policymaking and should not be construed in any way as recommendation of any specific model The hypotheses presented needs further exploration to draw any conclusion.

The radar chart in Figure 3 depicts the role of IT in various stages for each of the models of policy formulation. It has derived based on cumulative score of the four IT dimensions at each stage for each model. The edges represent the five stages and various policy formulation models are shown in different colours. The farther the lines are away from the centre / core, greater is the role of IT in that stage and vice versa.

The radar chart in Figure 4 depicts the overall role and emphasis of IT in various models of policy formulation. It has been derived based on the cumulative score of the four IT dimensions at all the stages together. It can be observed that the role of IT is diminished in the Elite model, moderate on the Incremental model and peaks in the Group, System and Rational models.

The goal of employing IT is to make government policies more efficient, effective, and cost-effective. The process of formulating and implementing public policy has taken on the shape of a collaborative effort between governmental organisations, state institutions, and social groupings. The current governance structure is multi-actor and multi-level. Digital technologies connect stakeholders and enables evidence-based policy-making. As a result, IT is a critical tool in the intricate processes of public policymaking. It will aid in the objective monitoring of policy implementation and the completion of impact assessments. As exhibited in this article, in all the stages of public policy formulation and execution, IT plays a varying degree of role which need to be verified based on real-life data.