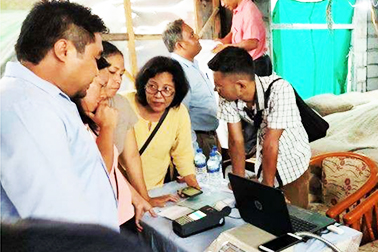 Pu K.Lalrinliana, Minister of State, Food Civil Supplies and Consumer Affairs (FCS&CA) launched the Electronic Point of Sales (ePoS) device at the Government’s Fair Price Shop (FPS), Zonuam, Aizawl. The same facility is expected to be installed in all the 149 FPS throughout Aizawl in this month. In addition, 1270 FPS in other parts of Mizoram are expected to be provided with ePoS as soon as possible. With this implementation, Mizoram has joined other states in the drive for ‘End to End Computerisation of Targeted PDS Operation’, a joint initiative of Ministry of Consumer Affairs, Food & Public Distribution and National Informatics Centre (NIC).

In his inaugural address, the Minister gave his assurance to the beneficiaries that this machine is a simple device that can be easily operated by users. Highlighting the importance of digitization of FPS, he said, “Rather than complicating the process of Public Distribution System (PDS) in FPS, this scheme is meant to ensure the real beneficiary get his exact quota of ration every time, to ensure transparency in the PDS, to reduce wastage and to contain unfair disposal of the surpluses which frequently cost the government, heavily”.

In addition, he reminded all the beneficiaries on the necessity of linking their Aadhaar and their Ration card in order to benefit through the PDS scheme, post the implementation of ePoS at FPS. The reports on administrative and technical functioning areas was given by Pu Robert C. Lalhmangaiha, Deputy Director, FCS&CA and PU Lallawmkima, Scientist -B, NIC-Mizoram, respectively. Live demonstration of FPS Automation/Operation of ePoS Machines was given in the august presence of Pu Zothantluanga, MLA,15-Aizawl West-I Constituency, Pu HL Rochungnunga, Commission & Secretary, FCS&CA, along with the  staff officers from directorate and the districts who were also attending the function