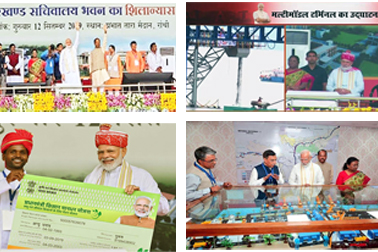 Hon’ble Prime Minister Shri Narendra Modi visited Ranchi, Jharkhand on 12th September 2019. NIC Jharkhand provided full support for the setup & functioning of the IT Cell for PMO Camp Office at Prabhat Tara Maidan, Ranchi, and other IT activities including webcast of the event and social media coverage.

Some of the important launches & inaugurations held at the function were: