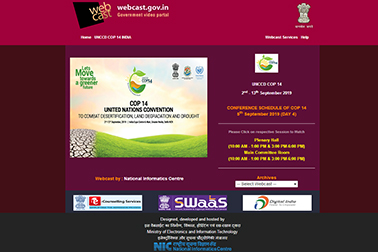 The 14th Conference of Parties (COP14) to the UN Convention to Combat Desertification (UNCCD) is being held from 2nd September, 2019 to 13th September, 2019 (12 days) by the Ministry of Environment, Forest and Climate Change. It  began on 2nd September, 2019 at India Expo Centre & Mart, Greater Noida. Shri Prakash Javadekar, Union Minister for Environment, Forest & Climate Change (MoEF&CC) in presence of Executive Secretary, UNCCD, Mr. Ibrahim Thiaw; MoS, MoEF&CC; Shri Babul Supriyo and other dignitaries, expressed how mass awareness and public participation is the need of the hour.

The NIC Cell in the Ministry of Environment, Forest and Climate Change was mandated the task of webcasting the event simultaneously in 3 Halls viz. (i) Plenary Hall, (ii) Main Committee Room and (iii) Press Conference. The NIC Webcasting Division is successfully providing the webcast services every day. The NIC Cell in the ministry has also hosted COP-14 website in the NIC Cloud environment.

During the conference, Shri Javadekar said, “122 countries, have agreed to make the Sustainable Development Goal of achieving land degradation neutrality a national target.” Shri Javadekar also mentioned that Prime Minister Shri Narendra Modi will inaugurate the high-level segment meeting on 9th September, 2019. Brazil, China, India, Nigeria, Russia and South Africa, which are amongst the largest and most populous nations on Earth are in the list of 122 countries mentioned here.

An estimated 7,200 participants that include ministers and representatives of governments, non-government and intergovernmental organizations, scientists, women and youth from the 197 Parties are expected. They will take around 30 decisions with actions that aim to strengthen land-use policies worldwide and address emerging threats, such as forced migration, sand and dust storms, and droughts.

Send us your valuable feedback or suggestion so that we can make it even better.