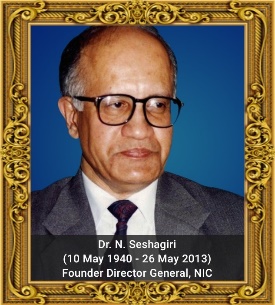 Dr N. Seshagiri, Founder Director General of National Informatics Centre (NIC) and former Special Secretary to Government of India, was a great visionary and ahead of his times. He possessed immense intellectual potential and high technical quotient. He was instrumental in setting up of the Software Technology Parks in India and was also the crusader of e-Governance movement in the country.

Dr. N. Seshagiri believed in and embraced the power of technology for efficient public service delivery thus making ICT culture palpable in various sectors across the country.  As the architect of the Nationwide Computer Network (NICNET), Dr. Seshagiri drafted various software and hardware policies that revolutionized Information Technology (IT) at the grassroot level for the benefit of the common masses.

A pioneering architect of IT for the Government of India, Dr. N. Seshagiri was conferred with the prestigious Padma Bhushan Award, Vikram Sarabhai Research Award, O P Bhasin Award, Asia Jyoti Award, Karnataka Rajya-Utsav Jyoti and several other awards. During his 25 years association with NIC, he trained and guided a generation of scientists, engineers and technocrats in various Government departments across the country. His pioneering efforts have left behind a lasting footprint on India’s IT scene.

The founding father of NIC may not be with us, but his inspiring ideas will continue to guide us and the generations to come.